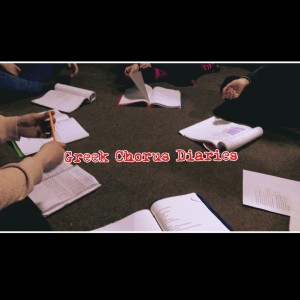 Hello, and welcome to the first ever Greek Chorus Diary entry. I’m Natalie, coming to you from the depths of the Burjesta extended family and this is the place for wonderfully weird world of the Burjesta Greek chorus, updated every week with details straight from the performers themselves.

So far work on Medea has been long, arduous, and an utter brilliance of fun at the same time. From the invention of Greek Chorus Tag to the many ways of learning to act ‘collectively individual’, we’ve all come a long way since those fateful December auditions.

But with just four short weeks to go before opening night at The Casa, the cast of Medea are having to cast out the antics, the banter and finally get down the really serious business of final rehearsals and show prep.

Medea, for many of the cast and creative team, has been a production unlike any other. Greek tragedy, it seems, demands a certain mixture of tender love and care, juxtaposed with the odd barked order, teamwork, copious amounts of tea and a mutual understanding from everyone involved that all theatre to some extent is one great experiment. But this one perhaps more so than others: Medea presented itself to Burjesta as the first script to feature a ‘chorus’- not in the way that many might anticipate a chorus to be featured in a play; it is neither the embodiment of song and dance and both those things equally, coupled with reverent storytelling that is invaluable to the plot. A cast of eight make up the chorus, Sam Walton, Rebecca Howard, Faye Caddick, Mairi Kennedy, Maria Hutchinson, Helen Shrimpton, Vicky Lodge and myself) and are charged with reflecting the mood and ambience as it shifts within the story. With the driving force behind this being the impassioned Medea herself, the chorus must sea-change with all the sensitivity and depth of the ocean.

Each week from now until the end of Burjesta’s run of Medea, a different member of the chorus will update you with the progress of the production, the challenges and rewards they stood to face that week and exclusive behind the scenes details you will only find here.

In between these ‘Chorus Diaries’ cast members Mikyla Durkan (Medea), Jonathon Bibby (Jason), Ifan James (Aegeus and Creon), Gillian Paterson-Fox (The Nurse), Angela Parkinson (The Tutor) and Yahya Baggash (The Messenger) may chime in with entries of their own, but surprises are best left unspoiled!

For me, becoming part of Medea, and by extension, of Burjesta, has been an enlightening experience. Yes, all theatre productions need teamwork to succeed, but being part of the chorus has taken this to another level. I hope my fellow chorus members will agree that all these rehearsals, getting to know one another, mind and body, 12-15 hours per week has been a lesson in communication, in sharing, and a learning curve that I wouldn’t exchange for anything. We all seemed to have found our niche, our talents taken on personalities: not in recent months has every muscle been so thoroughly stretched and worked as in Rebecca’s pre-rehearsal physical warm-up’s. I knew Sam Walton and Faye Caddick a little bit before Medea, now that has become a whole lot more, with their dynamic and infectious friendship. Mairi Kennedy, understudy to Medea, is the depth amongst all our comedy.

I have discovered Mikyla to be a chameleon from comic to tragedian, with her achingly funny talks on everything from costumes to Guinea-pigs, quick-changed to her embodiment of shiver-inducing revenge seeker. Director Julian has a working style that I again have not seen in action before, but has been the gentle, encouraging force behind all our friendships formed, since all of us auditioned in December.

So- welcome to the Greek Chorus Diaries! I hope all of you stick with us, we are an odd lot, with much to say and share, and the only place you’ll find it is right here. Expect the next entry Sunday 8th March, and every Sunday thereafter!