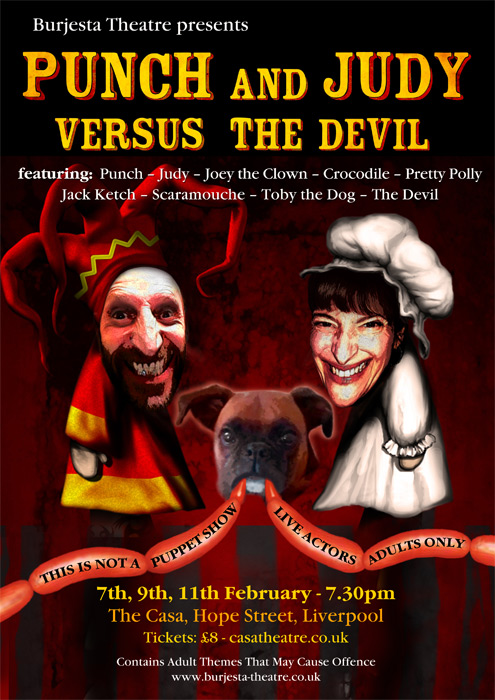 Punch & Judy Versus The Devil

Punch and Judy was our last production as resident theatre company at The Casa, it was most definitely ‘out there’ and received rave reviews.

Mother Goose Panto was our 17th production to date, a hugely absorbing but enjoyable and well received adaptation of the precursor to all modern day pantos, the 1806 Drury Lane shows of ‘Mother Goose and Her Golden Egg’. It was great fun combining modern aspects of panto with commedia dell’arte ‘clowning’…

Revolution, our sixteenth production to date, looked at the momentous events of the Russian Revolution on its 100th anniversary.  Based on four years research and multiple eye-witness accounts it was an incredibly complex piece of work.  We were fortunate to have such a talented cast of actors playing multiple roles to convey in a mixture of drama, reportage, chorus work and song the ‘ground-shaking’ events in Russia 1917.

Our fifteenth production to date was a look at the work of Italy’s greatest theatrical couple of modern times, Franca Rame and Dario. We performed four of their ‘feminist’ monologues at our place of residence, The Casa and at the Unity Theatre to acclaim. The four pieces were ‘A Woman Alone’, ‘The Rape’, ‘Rise and Shine’ and ‘Medea’.

Our 14th production, was by far our most ambitious to date condensing nine of Shakespeare’s history plays into two and a half hours of magical drama and poetry covering the Hundred Years’ War and the subsequent ‘War of the Roses’ with great scenes and great characters, Falstaff, Richard III, Margaret of Anjou, Joan of Arc to name but a few.

Our thirteenth production was an in-house adaptation of Fyodor Dostoevsky’s 19th century classic novel set among the poverty and desperation of Petersburg. Raskalnikov an embittered intellectual decides that it would be morally right to kill a miserly old money-lender and use her money for the well-being of society. What follows is a nightmarish and hallucinatory tale of murder and madness. We had great fun translating this tale to theatre which including Russian lessons in rehearsals to get the pronunciations just right and some amazingly inventive costume designs from our two-team costume department. Very much a period drama we were delighted to see it well received by our ever faithful audiences.

Our twelfth production was our adaptation of Homer’s ‘The Odyssey’ an epic tale of magic, monsters, seductresses, romantic and sexual love, revenge, gods and goddesses. A wonderful story set against the backdrop of the Trojan War it tells the tale of Odysseus, King of Ithica who attempts to return home to his beloved Penelope besieged by unwanted suitors. In order to save her he will have to fight with and overcome all manner of monsters, witches, malevolent gods.

Our 11th production was Christopher Marlowe’s subversive and highly original morality tale of a man who sells his soul to the devil for 24 years omnipotence here on earth.  It was a great experience to submerge ourselves in Elizabethan theatre and to have it so well received by Liverpool audiences.

Our 10th production was an in-house adaptation of Euripides’s startling play, Medea, from the pen of Burjesta member, Jonathon Bibby. It was one of our largest productions with a cast of sixteen souls including two child actors and an all-woman Greek chorus. As well as performing it to our ‘home crowd’ at The Casa, we performed it in the open air at St Luke’s Bombed Out Church as well as at Liverpool’s Unity Theatre. All in all it was a great success and a wonderful experience to bring classical Greek theatre to over 500 appreciative audience members here in Liverpool.

All Quiet on the Western Front

Our 9th production was an in-house adaptation of Erich Maria Remarques’ classic anti-war novel ‘All Quiet on the Western Front’ which showed the reality of World War I from a German perspective. We performed this to much acclaim receiving 4 stars from Liverpool Sound & Vision, 10/10 from Nerve Magazine and several standing ovations and sold out nights during the run. We completed the production with an abridged one hour version which we performed at St Luke’s Bombed Out Church as part of World War I commemorations taking place there in December of 2014.

Our 8th production, Reign of Vampires, used Karl Marx’s metaphor of the capitalist as vampire to explore 21st century society. We followed Professor Muhr and Frederica de Generale from the World Economic Forum at Davos, Switzerland to the vaults of the Bank of England as they pursue and are pursued by the ‘world governance of vampires.

Our 7th production to date was a bittersweet romance of all things sugary. A Christmas show with a difference performed in the style of an advent calendar which looked at the West’s relationship with sugar over the previous 500 years, the effects of it upon our health and its promotion by the Food & Drinks Industry. Magical and surreal in equal measures, it was a lot of fun and very well received!

The Belly of Merrie England

Our sixth production introduced the Burjesta Clowns in the comic play ‘The Belly of Merrie England’… Liverpool, 2013 and the Burjesta Clowns arrive in Britain in search of wealth and good living. Follow them as they forlornly search through a British society in conflict and decline for ‘money hanging from the trees’; see them arrive in London expecting ‘streets paved with gold’ only to witness Thatcher’s funeral and a final bizarre showdown with the bankers of the City of London. 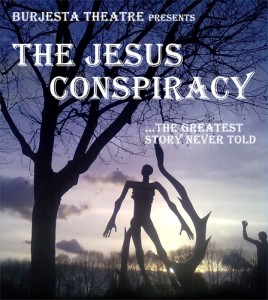 Our fifth production was an adaption of Scottish playwright’s controversial take on the New Testament, ‘The Pauline Conspiracy’, retitled as ‘The Jesus Conspiracy’. Somewhat atypical for Burjesta Theatre this play looked at the dramatic events surrounding the life of Jesus and the appropriation of his message by Paul to ‘create’ a Christianity more suitable to the ruling classes. A well-received production which made new demands on the Burjesta crew!

‘The Pied Piper of Liverpool’

Our fourth production was an original, innovative adaptation of The Pied Piper, setting the story in Liverpool among corruption and austerity cuts. It was a lot of fun for all concerned with talking eloquent rats, dastardly human villains it turned the story somewhat on its head…

‘Sometime in the near future’ and Liverpool is a city in crisis…
As the Mayor closes down hospitals, schools and libraries
A plague of rats overruns the city….
Come from ‘afar’ the Pied Piper soon realises
That all is not as it seems at the Town Hall.

Look forward to seeing the dastardly ‘Lord Rug’, the villainous ‘Runcorn Local’, the seductive ‘Dame Hoodless’ and lovelorn Jennifer whose hearts pounds in vain for the Pied Piper…

Will the noble Queen Rat rally ‘Ratkind’ to avoid a dreadful end?!
Will troubled 16 year-old Anthony come to the fore to save the day?!
And what does the Pied Piper’s Sparrow have to teach us about the meaning of life?!

Come see to the fate of Liverpool’s children….

Come, see…. ‘The Pied Piper of Liverpool’ and treat yourself to some ‘serious fun’!!

Our 3rd Production ‘The Real Monsters’ was a Halloween Variety Show, which looked at the ecological, environmental and human cost of industrilisation and capitalist quest for profits.

The show used a variety of styles to put across its message, with a wonderful bee ‘waggle’ dance that had everyone commenting, great ‘magic’ from the wonderful Franco whatever his name was, come all the way from Naples, Italy and a Greek-style oracle to deliver what some would prefer not to hear, ‘the truth’.

All in all great fun, with much verve and originality, a happy production for all concerned.

cant sleep clowns will eat me

Our second production, performed throughout Liverpool in June of this year, was ‘cant sleep clowns will eat me’, ‘an explosive musical farce’, it told the story of a terrorist plot to blow up a visiting royal to a Liverpool supermarket. With a cast of 16, 10 original songs with music by Mark Halligan of Liverpool rockabilly band Furious and Jeni Anthony of The Dots, all originally choreographed and surreal fruit backdrops, it was certainly a feast for all the senses.

Watch out for photo uploads from the show which will be appearing shortly….

At each show we tried to create an event such as a Valentine’s Night Out with a Curry at The Casa! We also had a very well-received ‘Interactive Interval’ at The Lantern and The Williamson Tunnels, with the ghosts of Gathering Jack’s victims wandering through the audience; forensics searching the scene for DNA evidence and the Police Inspectors questioning the audience!!!!

Liverpool based trio ‘The Dots’ provided live music at both The Casa and The Lantern events.

Click on the photo section to see how it looked!