Burjesta Theatre Workshop – Revolutionary Women
Wedneday 12th July, 7pm @ The Casa, Hope St, Liverpool
£3/£2
This week’s workshop from our ‘Revolutionary Theatre’ series will be looking at the prominent role played by women in three different revolutionary movements –
The French Revolution (the March on Versailles, 1789)
The Paris Commune (Saving of the Canons, Montmartre, March 1871)
The Russian Revolution (beginning of the Revolution on International Women’s Day in February 1917).
All are welcome beginner or experienced. And men don’t think this workshop is just for women we need your contribution too!
This is the last in our series of ‘Revolutionary Theatre’ workshops which looks at how revolutionary activity may be depicted in theatre. It leads into auditions for our autumn production ‘Revolution’ which covers the events around the Russian Revolution.
The audition takes place on 26th July and there is a supporting workshop for it on the 19th July. If you are interested in auditioning please click on the following link for more information –
www.facebook.com/events/1894267187456480
Regards
Burjesta 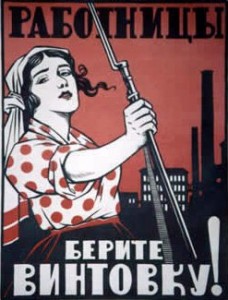