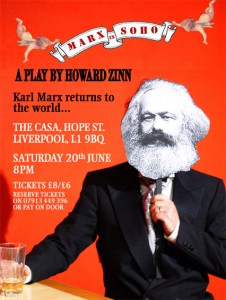 ‘Marx in Soho’ –
A play by Howard Zinn

Karl Marx is back!

“Don’t you wonder why it is necessary to declare me dead again and again?”

Karl Marx has agitated with the authorities of the afterlife for a chance to clear his name. Through a bureaucratic error, though, Marx is sent to Soho in New York, rather than his old stomping ground in Soho, London, to make his case. The play introduces us to Marx’s wife, Jenny, his children, the anarchist Mikhail Bakunin, and a host of other characters. It is a brilliant introduction to Marx’s life, his analysis of society, and his passion for radical change.

And in an era of savage austerity cuts and an ever-growing disparity between rich and poor this play is more relevant than ever.

The playwright Howard Zinn, best known for his book, ‘A Peoples History of the United States’ adds:

“Karl and Jenny Marx had moved to London after he was expelled from country after country on the European continent. They lived in the grubby Soho district, and revolutionaries from all over Europe, arriving in London, trooped in and out of their home. That imagined scene — Marx at home, Marx with his wife, Jenny, with his daughter Eleanor — fascinated me.”