We begin a new series of workshops looking at Shakespeare’s unparalleled cycle of history plays. Running from the reign of Edward III through to the arrival on the throne of Henry VII, two centuries worth of conflict, war, power politics and intrigue!

We’ve included as our first play Edward III, a ‘contested’ play of Shakespeare. Whether he wrote all, some or none of it, it’s a fine Elizabethan play worthy of consideration. It centres around Edward III’s claim on the French crown and Prince Edward’s (the Black Prince) valour in battle, as well as war with the Scots and a romantic intrigue with the Countess of Salisbury. It’s available for free on-line if you want to familiarise yourself with it.

All our welcome, from beginner, to experienced actor to Shakespearean expert. Each session is a stand alone session costing £3/£2.

Please note this an acting course, not an academic course, everyone attending must be prepared to act as characters within the scenes we are going to dramatize.

This course will lead into a production in 2017 but you can simply attend the workshop with no obligation to commit to being part of that production. 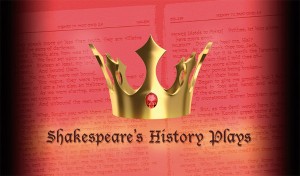