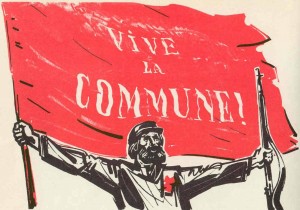 This Wednesday, 20th July we will be concluding our work on ensemble acting, the modern 21st century chorus combined with main character acting by acting out an in-house ‘mini-script’ on the subject of the Paris Commune.

The Paris Commune of 1871 was a momentous event in the history of working class uprisings to take power. For two brief months, the working-class of Paris held power and governed the city in their own interests before being crushed by the superior forces of the French bourgeois Republic. In its aftermath 20, 000 Communards were slaughtered by a vengeful bourgeoisie (with a similar amount being transported to isolated New Caledonia in the Pacific Ocean).

Revolutionaries, despite its failure, held it up as an example of what could be achieved. Lenin studied it in great detail while Marx a contemporary onlooker from London said of it ‘If you want to know what the dictatorship of the working class looks like, it is the Paris Commune’.