This Wednesday 2nd December (7pm @ The Casa, Hope St, Liverpool)
will be the second of two workshops dedicated to Elizabethan and Jacobean theatre. Last week we looked at Shakespeare, so this week we’ll be looking at his contemporaries, Marlowe, Jonson, Middleton, Webster and all.

For roughly 50 years running from the end of the 16th century up to the outbreak of hostilities that went on to become the English Civil War English dramatists produced a veritable Golden Age of theatre. We’ll be looking at some of the major works such as Doctor Faustus and the Revenger Tragedy as well as some lesser known plays. We’ll also be looking at another Golden Age of theatre that was happening at the same time in Spain with a look at ‘Spain’s Shakespeare’, Lope de Vega (the Monster of Nature as he was called for his output of nearly 2, 000 plays!) and his most well-known play ‘Fuente Ovejuna’ a brilliantly exciting play of class warfare between the aristocracy and the peasantry.

All welcome no prior experience needed.
Workshop costs £3/32 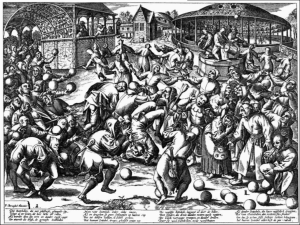