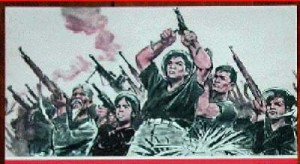 Shakespeare, Lope de Vega, Brecht, Venezuela, Russian Revolution…
We begin a new series of workshops on Wednesday 10th May dedicated to ‘revolution’. We’ll have sessions looking at how some of the great playwrights have portrayed uprisings, revolutions, rebellions and class conflict including Shakespeare’s ‘Coriolanus’ (popular uprising against the Roman Patricians), Henry VI Part II (the Jack Cade Rebellion in 15th century England), Lope de Vega’s ‘Fuente Ovejuna’ (peasant rebellion in Spain) and Bertolt Brecht’s ‘Days of the Commune’ (the Paris Commune of 1871).
We’ll also be asking participants to come up with drama to convey contemporary revolutionary situations.
Finally we’ll look at some of the key events in the the Russian Revolution.
This will lead in to auditions in July for our Autumn production – ‘Revolution’ which, on the 100th anniversary of the Russian Revolution, covers the events that led up to and took place in Petersburg, Russia and Europe in 1917.
All welcome from total beginner to experienced actor
Each session costs £3/£2 – come as and when you wish
Regards
Burjesta