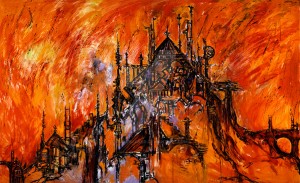 & New Production – ‘Burning of the Sick and the Poor’
Starts Wednesday 10th January, 7pm
The Casa, Hope Street, Liverpool, £3/£2
This Wednesday we begin a new series of workshops in which we will look at the devising process for theatre and asking participants to come up with devised pieces of drama based on provided content material. These workshops will run through until March and will lead into a production, working title ‘Burning of the Sick and the Poor’.
This will be a satire on contemporary British society which will look at such subjects as homelessness, slum landlordism, ‘austerity measures’, the penalisation of the poor claiming benefits, the attack on the working conditions and pensions, the privatisation of the NHS, the commercialisation of the education system, treatment of refugees and migrants and such like. It will be performed at our place of residence, The Casa, as well as at St Luke’s Bombed Out Church, in late Spring/Early Summer.
The first workshop will look at a medieval morality tale accredited to the historical figure of Vlad the Impaler.
All are welcome from total beginner to experienced actor. Please note there is no obligation to take part in the production if you just want to attend the workshops. If you do take part in the production, please also note, this is unpaid work.
For further information send an email to info@burjesta-theatre.co.uk
Regards
Burjesta