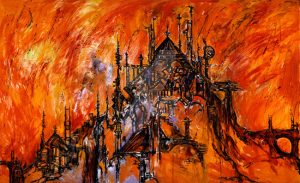 This week we’ll be continuing our look at the housing crisis in the UK with 3 pieces of devised theatre, two satires, one drama looking at issues such as the proposed banning of homeless people on the streets of Windsor for the wedding of Harry and Megan; the Grenfell Fire and a mythical anecdote of Vlad the Impaler burning to death his peasants in 15th century Wallachia reimagined for 21st century Britain.