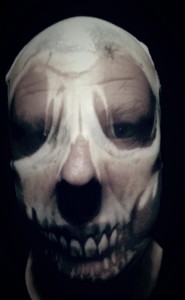 Doctor Faustus Update – We’re just putting the final touches to our re-staging of Doctor Faustus for the Unity Theatre, this coming Friday, 20th November. There’s a new character, as well, we’ve added into the mix – the ‘Soul Keeper’ which should make for an even richer brew. We look forward to seeing you if you’re coming. This night is sold out. If you don’t have tickets you can contact the Unity and ask to be put on their ‘Reserve List’. We don’t have tickets available ourselves.