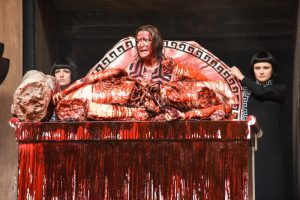 ‘the dead are killing the living’

This week we begin a new series of workshops with ‘The Oresteia’ by the Greek playwright, Aeschylus. It is the only existing trilogy from the classical Greek period, one of the earliest plays in the history of Western drama and a stunning, violent and bloody tale of revenge, justice, the movement from barbarism to civilisation and the subjugation of matriarchal society by a patriarchal one, centred around Homer’s mythical tale of the House of Atreus.

We will be focusing on the first of the three plays, ‘Agamemnon’ which looks at the return home of Agamemnon from the Trojan War and his murder by his wife Clytemnestra. The workshop will be focused on ‘beginnings’ and the building up of tension in preparation for the murder.

This is part of a series workshops which will trace the history of Western drama from its beginnings in Ancient Greece, through the Elizabethan period and on to modern theatre, looking at some of the great dramatists and their work. They are first and foremost acting workshops and everyone attending will be expected to participate. No prior knowledge of the plays is expected though you will get more from the workshop if you take the time to read the play before the workshop (see link above). Each workshops is a stand alone workshop and you do not have to have attended to previous workshops nor commit to future ones. They cost £3/£2 per session.

All are welcome from total beginners to experienced actors.
For more information – info@burjesta-theatre.co.uk