Burjesta Workshops Wed, 1 August,  7pm @ The Casa, Hope St, L’pool
This coming Wednesday we have the second in a series of workshops looking at Brecht’s theatre and influence with extracts from ‘Fear and Misery of the Third Reich’ and a look at Brecht’s theoretical differences between ‘Dramatic Theatre and ‘Epic or Dialectical Theatre’.
All are welcome from beginner to experienced actor, with no prior knowledge of Brecht required and no necessity to attend every workshop. Each workshop costs £3/£2. Don’t worry if this all sounds over-awing please come along and throw yourself into it and have fun in learning something new!
We’ll be concentrating on one piece of work from ‘Fear and Misery entitled ‘The Jewish Wife’. You can read it here by clicking on the following link and going to page 45 of the PDF, Scene 9 –
http://www.socialiststories.com/liberate/Fear%20and%20Misery%20of%20the%20Third%20Reich%20-%20Bertolt%20Brecht.pdf
For those who couldn’t make the first session a reminder that in preparation for this coming workshop we asked you to conduct some homework: as you go about your business, maybe having a coffee in a cafe or waiting for a train or a bus watch people’s interactions in the street and observe in as much detail as you can a particular interaction, conversation or what have you around you. Record mentally in as much details as you can, what is said, how it is said, how people act and enact stories between themselves and then bring it along for this week’s session (no need to write it down, just have it in your mind’s eye.
Please find below an outline of notes from the first session from ‘the street accident’ which give some of Brecht’s key thoughts on creating ‘epic’ or ‘dialectical’ theatre which will be of use for you to read before this weeks session.
Street Accident Exercises ~
Notes from ‘A basic model for an Epic Theatre’ – 1938
‘It is comparatively easy to set up a basic model for epic theatre. For practical experiments I usually picked as my example of completely simple, ‘natural’ epic theatre an incident such as can be seen at any street corner: an eyewitness demonstrating to a collection of people how a traffic accident took place.
The bystanders may not have observed what happened, or they may simply not agree with him, may ‘see things in a different way’, the point is that the demonstrator acts the behaviour of the driver or the victim or both in such a way that the bystanders are able to form an opinion about the accident’.
Brecht goes on to say that if the elements contained in this exercise are not present in ‘epic theatre’ proper then it is not ‘epic theatre’.
The demonstrator should not ‘cast a spell’ with a marvellous transformation of themselves into the characters of driver and victim. They don’t need to be artful, in fact shouldn’t be and if they are limited physically can just say, for example, ‘the person actually move three times faster than I am doing.’
He is not to make his performance act as an ‘experience’ for the audience.
[Burjesta – I feel this is akin to two people in a pub and one telling the other what happened last night when two mutual friends had a row and fell out]
Another element should be that epic theatre has ‘socially practical significance’, that the actions of one person let to this result, different actions would have led to different results.
The demonstrator should only use such characterization as is necessary to reveal his thoughts about the person, that they were acting selfishly or unreasonably, rather than a complete character profile. Characterization should be developed from their actions not the other way around. This means that character or human nature is not fixed but based on social norms of the society around them and their response to it.
The demonstrator should not let the characters views go uncontested if the driver complains that the accident was caused by working too long hours, the demonstrator can comment and say, ‘look at him justifying himself when he never even joined a union for better conditions!’
In short the actor must remain a demonstrator, he must present the person demonstrated as a stranger, he must not suppress the ‘he did that, he said that’ element in his performance. He must not go so far as to be wholly transformed into the person demonstrated. The feelings and opinions of the two are not merged into one.
The Alienation effect is achieved by paying exact attention to what the person did, in our example, he walked off the kerb with his left leg, not his right (as one audience member might comment). By being so precise we alienate specific behaviour, that is draw it out so it is seen as critical, we can also comment on its significance, if he hadn’t of done so this wouldn’t have happened, allowing the audience, too, to draw conclusions from our demonstration.
Non-naturalistic techniques can be used such as acting something out in slow motion, repeating a specific action several times…
The performance’s origins (should) lie in an incident that can be judged one way or another, that may repeat itself in different forms and is not finished but is bound to have consequences so that this judgement has some significance.
The object of the performance is to make it easier to give an opinion on the incident. 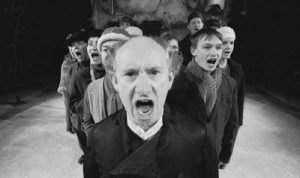